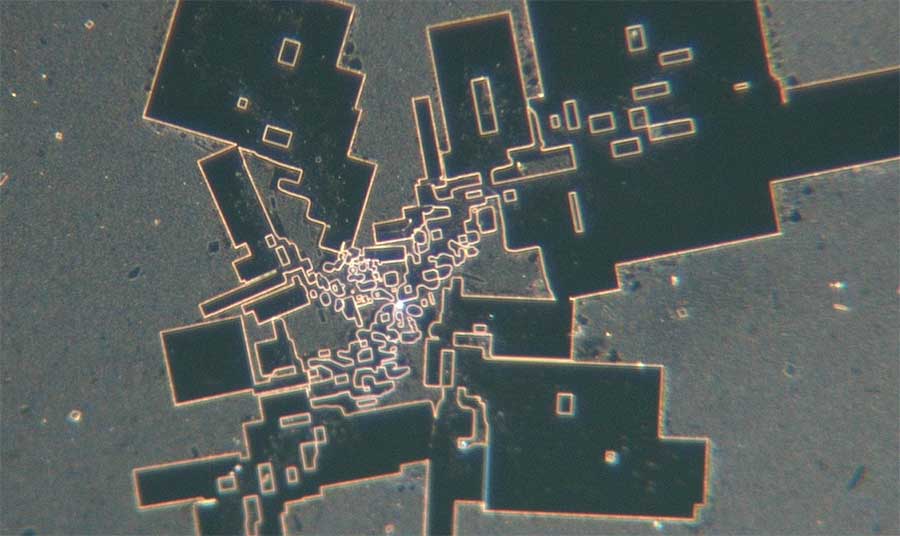 Microscopy: Nanotech In The Shots?

February 12, 2022 |By Life of the Blood | An International Collaboration

“For those who just want the short story: Here’s the picture of one drop of New Zealand’s Pfizer COMIRNATY “vaccine” under a cover slip, after it was inadvertently heated lightly, and viewed later the same day through dark field microscopy at low magnification, and projected onto a TV monitor.

The images below are from a new sample, after a new computer with top notch graphic capacity was purchased. These images came through software connected to a microscope camera.

Increase the magnification on the images below and look closely.

I have a background in medicine, mathematics and physics, with extensive phase contrast microscopy experience.

People who were injured by the Pfizer jab wanted help. At this time in 2021, I didn’t have a microscope.

Several doctors had come forward in other countries to report strange observations. Dr. Zandre Botha from South Africa showed the uniform strange round circles. La Quinta Columna showed what appeared to be microchips and other formations. Two other doctors talked about parasites and of all things, hydras!

This is not my first rodeo. Having previously experienced how those of us that critically look at the vaccine situation are heavily infiltrated by persons wishing to divert and control the narrative,  I thought, “What is real?”, “What is put forth in order to lead questioners to look like fools?”

After having a close look at the blood of dozens of vaccine injured people, patients started asking me about certain round and square bright yellow formations in their capillary blood as seen on the screen.

Nothing in the textbooks identified such things, and various people doing similar work, suggested that they might be crystals or some sort of slide or cover slip anomaly.  At first, I just told the patients that it wasn’t important—possibly uric acid or something like that.

Then several “empty” vials of Pfizer COMIRNATY vaccine were obtained. I trust the source of the shots 100%. The vials were from recent leftover vaccine after the shots had been given.

On a Friday in December, alone in my office, I took the vials out, thawed, and examined them. I drew up all the contents (just a few drops in each one) from each vial into a 3cc syringe with a 16G needle and put one drop of it on a slide with a cover slip, and another slide with a drop of vaccine mixed with a drop of human blood and put a cover slip on it.

The images that follow are from the different slides and were taken immediately after the slides were made.

The amount of activity in the liquid and the strange shapes were baffling to say the least.