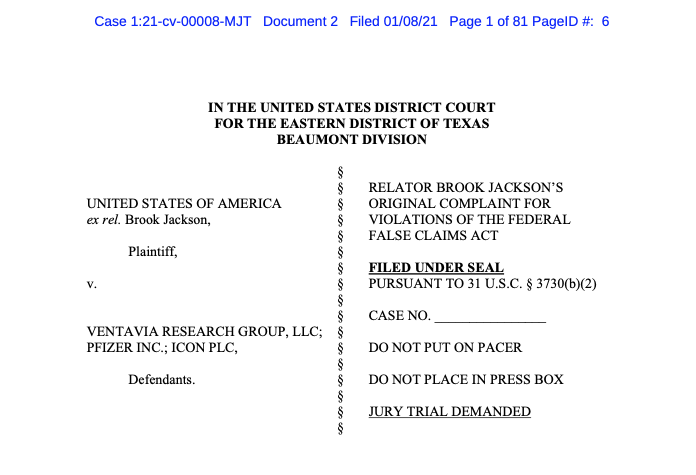 “In the race to secure billions in federal funding and become the first to market, Defendants deliberately withheld crucial information from the United States that calls the safety and efficacy of their vaccine into question. Namely, Defendants concealed violations of both their clinical trial protocol and federal regulations, including falsification of clinical trial documents. Due to Defendants’ scheme, millions of Americans have received a misbranded vaccination which is potentially not as effective as represented. The vaccine’s U.S. Food and Drug Administration (“FDA”) authorization resulted from a deeply flawed clinical trial that violated FDA regulations. Defendants have profited from the COVID-19 pandemic at the expense of the United States and its citizens by abusing the scientific process.”

“Joining me today is Brook Jackson, the Pfizer whistleblower who recently spoke with the British Medical Journal revealing documented safety concerns that directly undermine the trial data efficacy. Brook is here to set the record straight about what she saw during Pfizer’s phase 3 trial, how the corporate media ignored the verifiable information, and publicly share for the first time the evidence that proves the allegations.”