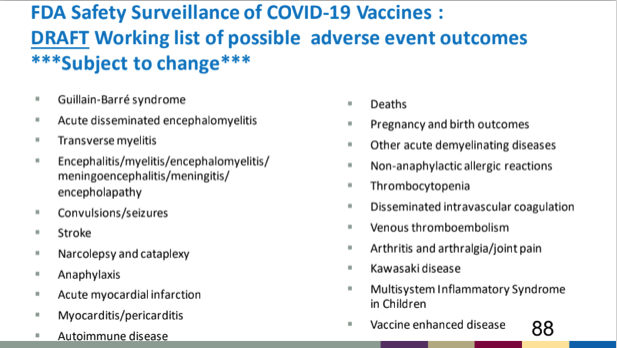 The Department of Defense Just Got Caught Lying About Vaccine Injuries

Whistleblowers claim a DoD database was changed to hide the truth

“The attorney Thomas Renz has just discovered that the Department of Defense is altering data to hide the number of our service members who have been injured by the experimental and deadly COVID vaccines.

Thomas Renz – Attorney.
“VaCCinE Manufacturers Hid The Risks From The Public – Millions Received The VaCCinEs Without Informed Consent”
THIS IS A MUST LISTEN.. (FACT) pic.twitter.com/PHalKCpe4j

Mr. Renz also has the sworn statements of four whistleblowers inside the DoD serving as Army medical officer who have reviewed the relevant information and corraborated that important medical data has been altered. All of them had access to the relevant database — called the Defense Medical Epidemiological Database (“DMED”) — and they independently verified the findings.

What did they find?

The Department of Defense responded to these whistleblower accounts by claiming that the increases in illness were actually false — due to “previously unreported” errors in the DMED database itself:

Following the exposé, the DOD responded with a statement that the dramatic spike in disease and medical conditions in DOD personnel immediately following the vaccine rollout in DOD was purely coincidental, and the result of a previously unannounced “glitch” in its DMED database, and had nothing to do with the vaccines themselves. The DOD maintains that the database glitch resulted in artificially low incidence numbers in the years 2016-2020, but that the 2021 data is accurate.

According to the whistlebowers, the DoD then took the entire DMED database offline and fraudently altered the information on the database. Here’s what happened in their own words:

The Department of Defense (DoD) responded that the increases in rates of illness and disease reported by Renz were due to a “glitch” in DMED. The DMED was then taken offline for some time. After DMED was put back online, query reports showed large changes to data queries for the 2016 through 2020 date range.

Tracking down the glitch reveals an unexplained change of data that can be observed in Medical Surveillance Monthly Reports (MSMR) published openly online. The May 2021 MSMR displays annual summaries of major diagnostic categories of ambulatory and hospitalization reports from 2016, 2018, and 2020. These major diagnostic categories are defined as the categories with the greatest number of reported events and constitute the vast majority of medical diagnoses. When comparing the numbers of ambulatory reports to the May 2019 MSMR (which displays summaries from 2014, 2016, and 2018), the totals for these diagnostic categories for 2016 and 2018 were substantially revised to display increases in all forms ofillness by an average of 17.5% (16.3% after excluding one category called “Other” that included a change in definition). Presumably these changes took place for all data from 2016 through 2020. Strangely, no such large revisions were made to hospitalization data, which would be expected if the revisions were due to a large cache of “lost and found” patient reports in which a proportion of the conditions resulted in hospitalization.

A review of the past decade of MSMR reports show a small handful of revisions larger than 2%, with nearly all changes in summary data far smaller than 1%. No major systemic data revisions were observed prior to the May 2021 MSMR. At the time of this report, no explanation was given for the massive changes in health data that would surely affect biomedical studies on these diagnostic categories. Best practices would dictate a detailed explanation for large and sudden changes—particularly as it pertains to one of the world’s most important medical databases. Further, the changes in all but one of the 16 major diagnostic categories fit the changes observed from queries performed after the DMED was put back online, purportedly to fix the “glitch”. This leads me to believe that the DMED “glitch” clearly corresponds to the large revisions that appeared in the May 2021 MSMR.

Further, and perhaps more disturbing, the data revisions are not randomly distributed as one might expect of “lost and found” reports added to a system, or many methods for recalibrating report definitions. These revisions are most prominent in the categories most heavily researched as injuries or adverse events associated with the COVID-19 quasi-vaccines, including those that Renz spoke about in the January 24 hearing.

There are enough signs to conclude with a high probability that the large-scale MSMR revisions published in May 2021 and associated DMED alterations made in January 2022 were made to mask illness data from early 2021 associated with vaccine rollouts, and likely fraudulent. An examination of the data should quickly reveal whether this is the case.

This is fraud on such a massive scale that it’s hard to comprehend the implications to our society. The DoD, and the entire federal government, have been caught mandating the use of deadly DNA-altering drugs that have now harmed millions of people. This is going to be the largest medical scandal in the history of the world. Nothing else comes close. This should bring down the Biden regime ultimately, and lead to massive reforms in such corrupt agencies as the FDA and the CDC — as well as criminal indictments for figures in Big Pharma and Big Government like Fauci and Bourla. The federal government has recklessly gambled with the health of the American people.

There will need to be thorough public investigations in the coming years over this coordinated global fraud — if our republic is going to survive. (Regarding that question: I have my doubts.) How did the public health sector and the medical community get captured by Big Pharma?

According to Mr. Renz, the real increases in health issues post-vaccination are the following:

This might explain why the DOJ is hiring tort lawyers (as fast as they can) to handle vaccine injury cases brought against the federal government and HHS — an exclusive story that I broke on Substack just last week.

Needless to say: the federal government knows from its own data that the vaccines are dangerous drugs that don’t work — and it’s pushing the drugs anyway while hiding the data.”