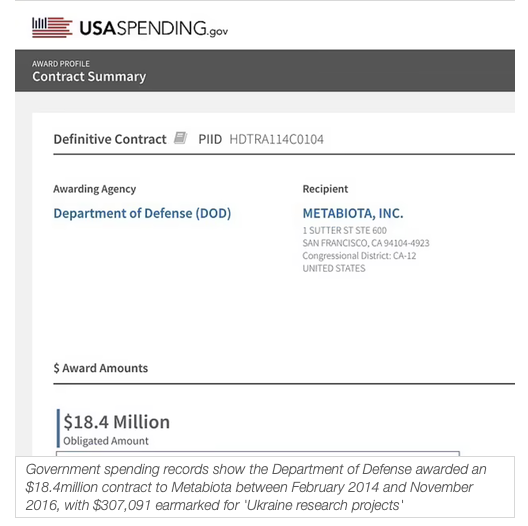 “Emails from Hunter Biden’s notorious laptop reveal that the first son helped secure millions of dollars for a DoD contractor – Metabiota – which specializes in researching pandemic-causing diseases that could be used as bioweapons, according to the Daily Mail, which obtained Hunter’s emails.

Moscow’s claim that Hunter Biden helped finance a US military ‘bioweapons’ research program in Ukraine is at least partially true, according to new emails obtained exclusively by DailyMail.com.

The commander of the Russian Nuclear, Biological and Chemical Protection Forces, claimed there was a ‘scheme of interaction between US government agencies and Ukrainian biological objects’ and pointed to the ‘financing of such activities by structures close to the current US leadership, in particular the investment fund Rosemont Seneca, which is headed by Hunter Biden.’ -Daily Mail

Hunter also appears to have introduced Metabiota to Burisma for a “science project,” ostensibly involving biosecurity labs in Ukraine.

On its face, Metabiota appears to be a simple medical data company – however a 2014 email from its Vice President to Hunter described how they could ‘assert Ukraine’s cultural and economic independence from Russia’ – an odd goal for a biotech firm at the time Hunter’s Dad was US point-man for Ukraine’s ‘reconstruction’ involving the Obama administration.”