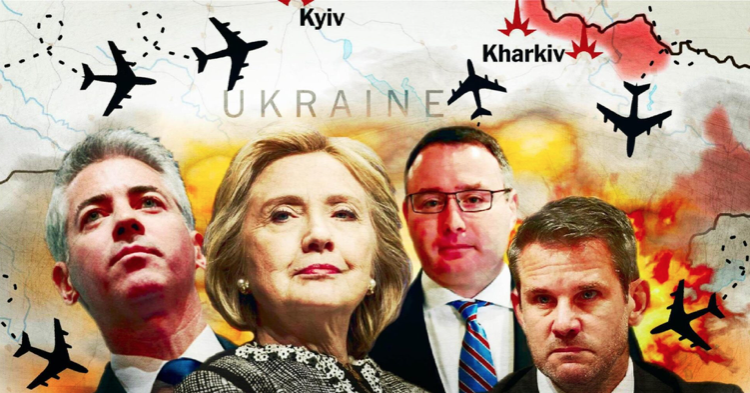 War is a crime. Keep in mind that billionaires, governments and the political ruling class are the primary cause of the world’s problems, and are incapable of solving the challenges facing our human civilization.

What is actually needed is to halt the escalation of military operations and to slap a quadrillion dollar war tax on those individuals and organizations seeking to wage war. -JD

What the Hell Is Going On? Globalist Cabal Is Now “Cheerleading” For Nuclear War

“Thanks to the Globalist American Empire’s ineffective, inflexible diplomacy, an avoidable solvable crisis in Ukraine has spiraled into a major land war.

Now, the shrillest GAE voices want to inflict an apocalyptic calamity on the whole world. Mindlessly, thoughtlessly, inexcusably, they are shoving the West to the brink of a full-blown nuclear war over Ukraine.

Back in January, Revolver warned that the implacable, no-negotiations attitude of the US and its allies was creating conditions for war in Ukraine. Such a war could be an existential danger to the planet:

And yet, while America looks away, the ruling class inches us dangerously closer to war. Russia is reportedly massing tens of thousands of troops along Ukraine’s border, and even deploying some in Belarus. America is shipping hundreds of millions of dollars in weapons to Kyiv’s government in response. There is talk of a Russian invasion, which Washington might counter by backing a violent insurgency, which would invite retaliation, and so forth, until America is on the edge of nuclear war over an impoverished country four thousand miles away.

The Ukraine crisis is a creation of the Globalist American Empire. It is a product of American overreach, and the crisis continues because the DC national security cabal refuses to admit any mistakes, backtrack, or engage in any serious negotiation whatsoever. America’s ruling elites are willing to risk war, possibly even nuclear war, for the sake of their own desire to exert control everywhere on Earth.

READ THE REST: The Globalist American Empire Would Rather Risk Nuclear War Than Admit Its Own Arrogance

Since then, events have only proven our analysis correct. Drunk on the same sense of self-righteousness that encouraged war in the first place, GAE public figures are advocating “tough” policies that will invite further escalation and potentially turn a regional war into the worst disaster in human history.

America’s ruling elite is so used to kicking its own impotent population around with no fear of any kind of repercussion that they think they can do the same with a nuclear power. The ruling class is wrong, and its arrogance is courting existential calamity. Russia has amassed more than 6,000 nuclear warheads, which is more than even the United States possesses. Nearly 1,500 of these weapons are deployed, ready for use. Russia possesses a full nuclear triad of nuclear-armed bombers, submarines, and land-based ICBMs (Inter-continental Ballistic Missiles). Russia cannot be immobilized with a single first strike; if it feels cornered it has the firing power to bring down all of civilization.

Such a reality requires leaders who will treat the situation with caution and seriousness. Right now, the only acceptable and responsible approach is one that prioritizes de-escalation, and takes the conflict closer to a negotiated peace. But instead, our flippant leaders are babbling about whatever makes them feel toughest, creating an environment of constantly-escalating peril.

Arrogant loud-mouthed oligarchs on Twitter are not helping the situation. Americans normally imagine hedge fund managers to be experts on risk, but billionaire Bill Ackman is proving otherwise by being perhaps the most insane figure of all. In a Twitter thread Monday morning, Ackman openly called for US ground troops to intervene directly in Ukraine to fight Russia…

This morally derived, panicky urge to “do something” is everywhere within the West’s response. America and its NATO allies are lurching toward greater escalation and greater conflict. On the first day of war, kicking Russia off SWIFT was off the table; by Saturday it had become official policy. On Thursday, there were sanctions against Putin’s allies and inner circle, now Russian athletes are banned from all global sporting events and famed Russian composer Valery Gergiev was fired for not denouncing his friend Putin. For decades, Ukraine in the EU was a non-starter, now, the dirty deal could be finished by week’s end.

What are these reactions meaningfully meant to achieve? What is America’s goal in Ukraine? What does it want out of Russia? What is next if these measures don’t work? Under what circumstances will this escalation be allowed to stop? Just like in Iraq 19 years ago, nobody seems to be asking those questions. But in Iraq, only America’s reputation and well-being were at stake. Now, as America’s “elites” blunder into the same errors, the fate of the entire planet hangs in the balance.

Fortunately, while the rot is widespread, it hasn’t yet reached the absolute summit of government. The Biden Administration, for now, has emphasized that a no-fly zone isn’t happening. The European Union has backed off from initial reports that it would send fighter jets into Ukraine. For the time being, the Globalist American Empire has enough semi-competent (or at least non-suicidal) leaders to stave off calamity. Fingers crossed…”

Ukraine Update #3, by Paul Craig Roberts
https://www.paulcraigroberts.org/2022/03/01/ukraine-update-3/
War Propaganda About Ukraine Becoming More Militaristic, Authoritarian, and Reckless, by Glenn Greenwald
https://greenwald.substack.com/p/war-propaganda-about-ukraine-becoming
Every useful or pleasing claim about the war, no matter how unverified or subsequently debunked, rapidly spreads, while dissenters are vilified as traitors or Kremlin agents.
America Ignored Warning NATO Expansion Would Be Greatest Blunder Since Cold War, Ex-US Diplomat Says
http://memoryholeblog.org/2022/02/28/america-ignored-warning-nato-expansion-would-be-greatest-blunder-since-cold-war-ex-us-diplomat-says/
The Collapsing Covid Narrative Is Being Replaced With Putin and Ukraine
https://www.lewrockwell.com/2022/03/vasko-kohlmayer/the-collapsing-covid-narrative-is-being-replaced-with-putin-and-ukraine/