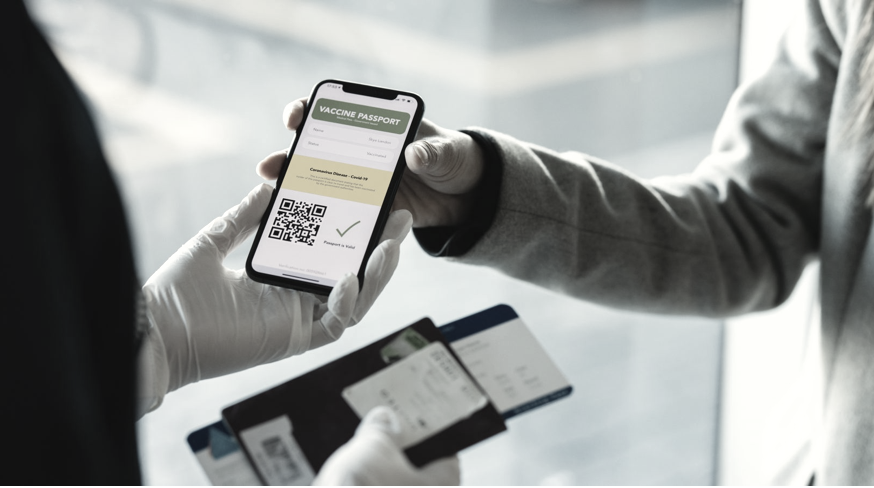 “Tech giants and US gov’t co-operate on “SMART Health Cards”, and their use is spreading across the US…& maybe the world.

Countries all over the world are totally scrubbing their Covid measures, mask mandates and social distancing rules.

The CDC has changed their guidance on vaccine doses, and said people don’t need to wear masks anymore. Boris has done the same, and (some) of the UK’s emergency powers are going to expire soon.

It seems like Covid is over, and the good guys won, right?

The pandemic narrative may be fading away, but certainly not without a trace. Covid might be dying, but vaccine passports are still very much alive.

This week, while the eyes of the world are fixed on Ukraine and the next wave of propaganda, the World Health Organization is launching an initiative to create a “trust network” on vaccination and international travel.

According to a report in Politico published last week:

The article quotes Brian Anderson, co-founder of the Vaccination Credential Initiative, which describes itself as:

a voluntary coalition of public and private organizations committed to empowering individuals with access to verifiable clinical information including a trustworthy and verifiable copy of their vaccination records in digital or paper form using open, interoperable standards.

They are, to take the PR agency sheen off this phrase, a corporate/government joint project researching and promoting digital medical identification papers.

The VCI has existed since January 2021, and its list of “members” is very revealing, including Google, Amazon, dozens of insurance companies, hospitals, “bio-security firms” and seemingly every major university in the US.

It’s run by a steering committee made up of representatives from Apple, Microsoft, the MAYO Clinic and the MITRE Corporation, a multi-billion-dollar government-funded research organization.

Anderson – who was an employee of MITRE before founding the VCI – tells Politico that the current system of international travel and vaccine records is:

piecemeal, not coordinated and done nation to nation…It can be a real challenge.”

Discussion of an international “Pandemic Treaty” gets underway today in Geneva, and any eventual agreement will doubtless include provisions on the matter of international vaccine certification.

If the VCI is involved – and with their backers, they doubtless will be – any international system will likely be based on their SMART Health Cards system.

SMART CARDS IN THE US – A COVERT FEDERAL VACCINE PASSPORT

VCI’s SMART Health Cards are the dominant tech in the emerging field of biosurveillance and “inoculation certification”. They are already implemented by 25 different US states, plus Puerto Rico and DC, and have become the US’s de-facto national passport

According to this article from Forbes (a puff piece which is little more than an advertisement):

While the United States government has not issued a federal digital vaccine pass, a national standard has nevertheless emerged.

They use the word “emerged” as if it’s a natural, organic process. But it’s not.

The US government, unlike many European countries, has not issued their own official vaccine passport, knowing such a move would rankle with the more Libertarian-leaning US public, not to mention get tangled in the question of state vs federal law.

The SMART cards allow them to sidestep this issue. They are technicallyonly implemented by each state individually via agreements with VCI, which is technically a private entity.

However, since the SMART cards are indirectly funded by the US government, their implementation across every state makes them a national standard in all but name.

The Politico article repeats the claim the US has no national system, adding that the US doesn’t have a federal vaccine database either:

The Biden administration has said it wouldn’t issue digital credentials and hasn’t rolled out standards for vaccine credentials it said it would issue. Complicating the situation is that the U.S. doesn’t have a national inoculation database.

The propaganda message here is underlining what the government doesn’t have and doesn’t know. The suggestion being that the SMART system is totally separate from the government, that it’s a private company that would never share your medical records with the state.

But only the terminally naive would believe that.

SMART Health Cards are run by VCI, which was created by the MITRE Corporation, which is funded by the United States government.

If you give SMART access to your medical records, you’d better believe the US government and its agencies will get their hands on them. They might not have their own database, but they would have access to MITRE’s database when and if they needed or wanted it.

And so would Apple, Amazon, Google and Microsoft.

Corporate giants serve as fronts for government programs and, in return, they get a big cut of the profits, bailouts if they’re needed, and regulatory “reforms” that cripple their smaller competitors.”