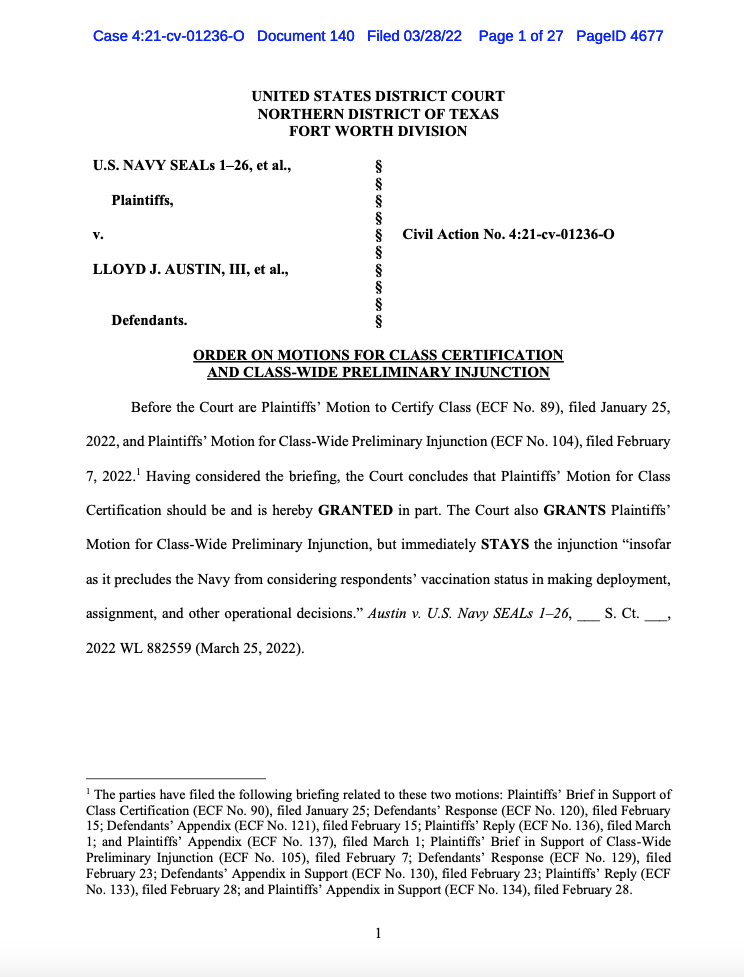 April 1, 2022 | Authored by Zachary Stieber via The Epoch Times | ZeroHedge

“The U.S. military’s COVID-19 vaccine mandate has been blocked for all Navy members seeking religious exemptions.

A preliminary injunction that previously covered 35 Navy SEALs now covers some 4,000 others.

U.S. District Judge Reed O’Connor, a George W. Bush appointee who entered the original ruling in January, agreed to expand it in part because all members who have applied for religious exemptions “have all been harmed in essentially the same way.”

“Each is subject to the Navy’s COVID-19 vaccine mandates. Each has submitted her religious accommodation request, and none has received accommodation. Without relief, each servicemember faces the threat of discharge and the consequences that accompany it. Even though their personal circumstances may factually differ in small ways, the threat is the same—get the jab or lose your job,” he said in a 27-page order.

The Supreme Court recently sided with the Pentagon in the case, ruling that Navy commanders can consider a members’ vaccination status when deciding on deployment.

The new ruling means “anyone in the U.S. Navy whose religious accommodation from the vaccine mandate was denied is now protected from any sort of punishment or involuntary separation, things like that,” said Mike Berry, a lawyer with First Liberty Institute, which represents the plaintiffs in the case.

Defense Secretary Lloyd Austin in August 2021 ordered all U.S. troops to get a COVID-19 vaccine, asserting vaccination would help the force stay ready and prevent contraction of the virus that causes COVID-19 vaccine.

The mandate has remained in place even as the three vaccines available in the United States have proven increasingly ineffective against infection from the virus, SARS-CoV-2, and have also waned against severe disease.

As of March 23, 3,320 active-duty Navy members have requested a religious exemption from the mandate, along with 864 reserve members.

The Navy has declined to comment on court orders, referring comment to the Department of Justice. A government lawyer did not respond to a request for comment.

Berry told The Epoch Times his organization wanted to expand the case to cover all service members seeking religious accommodation but under federal rules, they were not able.

The case is currently proceeding on multiple fronts. While O’Connor ruled on the motions for an expanded injunction and to certify a class, the U.S. Court of Appeals for the Fifth Circuit is considering an appeal from the Navy from the original injunction.

The Navy has kicked out 630 members so far for refusing to get a COVID-19 vaccine.”