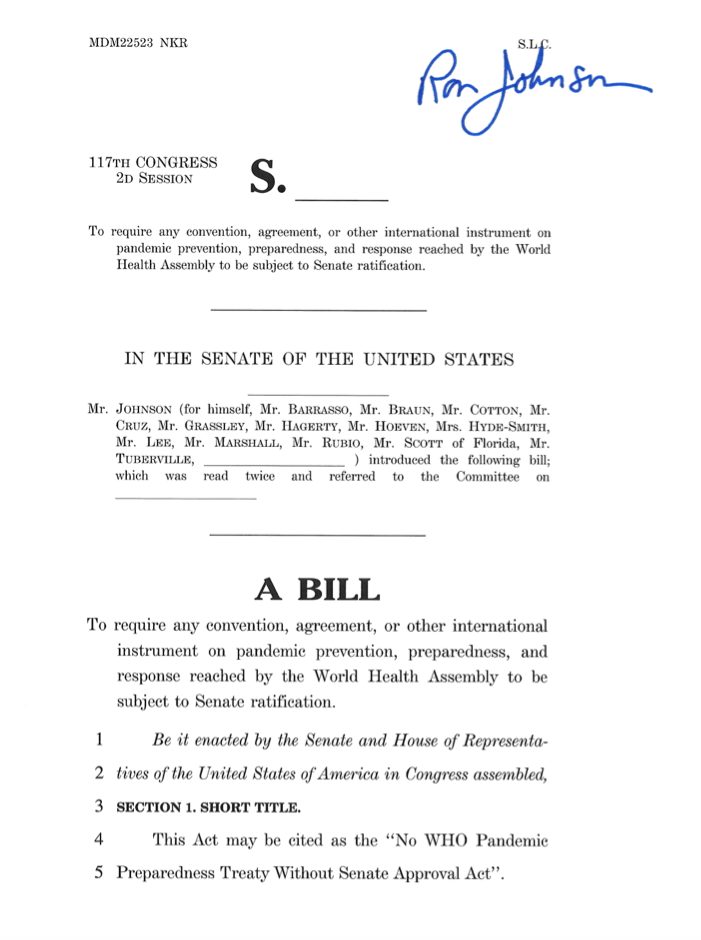 “The sovereignty of the United States is not negotiable”

WASHINGTON – On Thursday, U.S. Sen. Ron Johnson (R-Wis.) introduced the “No WHO Pandemic Preparedness Treaty Without Senate Approval Act” to require that any convention or agreement resulting from the work of the World Health Organization’s (WHO) intergovernmental negotiating body be deemed a treaty, requiring the advice and consent of a supermajority of the Senate. The legislation comes as the WHO pushes for broad new powers under a new “international treaty for pandemic preparedness and response.”

After the Biden Administration’s failed COVID-19 response and the WHO’s mismanagement of the pandemic, Americans remain skeptical of continuing infringements on personal liberties and freedoms. The legislation would provide more transparency in WHO agreements and a constitutional check on the administration.

“The WHO, along with our federal health agencies, failed miserably in its response to COVID-19. It’s failure should not be rewarded with a new international treaty that would increase its power at the expense of American sovereignty. What WHO does need is greater accountability and transparency. This bill makes clear to the Biden administration that any new WHO pandemic agreement must be deemed a treaty and submitted to the Senate for ratification. The sovereignty of the United States is not negotiable,” said Sen. Johnson.

“The WHO is a corrupt organization that is supposed to support international health, but instead it caves to tyrannical regimes and plays politics. The constitution is clear – any international treaty requires the advice and consent of the U.S. Senate. I am proud to join my colleagues in ensuring the WHO cannot dictate health policy in America,” said Sen. Rubio.

“The World Health Organization has completely failed the American people and the world by working hand in hand with the Chinese Communist Party to conceal the origins of COVID-19. The United States should not, under any circumstances, choose to relinquish American sovereignty and public health decisions to an organization controlled by Beijing. That’s common sense. I’m proud to join Senator Johnson and our colleagues on this bill to keep Americans’ public health choices in the hands of the American people,” said Sen. Rick Scott.

“Throughout the pandemic, the World Health Organization (WHO) showed a lack of good governance, transparency and independence. For years, I have raised concerns about the systematic problems and inability of the WHO to make real reforms. Our bill would require any WHO pandemic-related agreement to be reviewed and ratified by the Senate. The Senate must weigh in on a topic of such critical importance before binding the United States,” said Sen. Barrasso.

“In the course of this pandemic, the World Health Organization lost trust with many. I’ve pressed the World Health Organization for answers on its initial response, questioning its reliance on manipulated Chinese Communist Party health data, and abetting China. Given the Biden administration’s support for expanding the WHO’s responsibilities and the continued Chinese Communist Party influence over the WHO, it is important Congress plays its constitutional role in evaluating any potential treaty-like agreement,” said Sen. Grassley.

“This legislation would classify any new WHO pandemic convention or agreement as a treaty, ensuring that it is reviewed by the Senate and subject to approval of two-thirds of the Senate in order to be ratified. This will make sure that there is proper oversight of the administration’s actions at the WHO and help us maintain U.S. sovereignty,” said Sen. Hoeven.

“Actions by the WHO over the past two years, particularly in terms of the pandemic and abortion, raise serious questions about whether it operates as a truly independent body that ultimately benefits the American people.  I know many Mississippians are vexed that the Congress can’t act to stop some of the egregious decisions coming out of the WHO. In representing the American people, the Senate should have a role in determining whether our nation should be subjected to its biased or more controversial actions,” said Sen. Hyde-Smith.

“I refuse to cede America’s sovereignty on managing public health crises to the corrupt and inept WHO. Montanans did not elect the WHO to represent them in any level of government – I am glad to support this bill to prevent an international organization from possessing power over the American people,” said Sen. Daines.

“Because the Biden Administration has failed to hold the World Health Organization accountable and root out the Chinese Communist Party’s malign influence on the WHO, Congress must step up and defend American sovereignty and U.S. national security interests. This important bill would uphold the U.S. Constitution and require the Senate’s advice and consent to ratification on any convention, agreement, or other international instrument on pandemic prevention, preparedness, and response reached by the World Health Assembly’s so-called International Negotiating Body,” said Sen. Hagerty.

Read more about the bill in the Daily Caller.

The full text of the bill can be found here.

Link To Call Senators to Tell them to Co-Sponsor Sen. Johnson’s Bill, ‘No WHO Pandemic Preparedness Treaty Without Senate Approval Act’