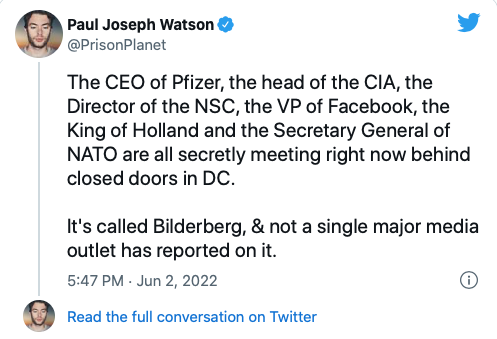 WASHINGTON, D.C. 2 JUNE 2022 – The 68th Bilderberg Meeting will take place from 2 – 5 June 2022 in Washington, D.C., USA. About 120 participants from 21 countries have confirmed their attendance. As ever, a diverse group of political leaders and experts from industry, finance, academia, labour and the media has been invited. The list of participants is available on bilderbergmeetings.org.   LINK

The key topics for discussion this year are:

1. Geopolitical Realignments
2. NATO Challenges
3. China
4. Indo-Pacific Realignment
5. Sino-US Tech Competition
6. Russia
7. Continuity of Government and the Economy
8. Disruption of the Global Financial System
9. Disinformation
10. Energy Security and Sustainability
11. Post Pandemic Health
12. Fragmentation of Democratic Societies
13. Trade and Deglobalisation
14. Ukraine
Founded in 1954, the Bilderberg Meeting is an annual conference designed to foster dialogue between Europe and North America. Every year, between 120-140 political leaders and experts from industry, finance, labour, academia and the media are invited to take part in the Meeting. About two thirds of the participants come from Europe and the rest from North America; approximately a quarter from politics and government and the rest from other fields.
The Bilderberg Meeting is a forum for informal discussions about major issues. The meetings are held under the Chatham House Rule, which states that participants are free to use the information received, but neither the identity nor the affiliation of the speaker(s) nor any other participant may be revealed.
Thanks to the private nature of the Meeting, the participants take part as individuals rather than in any official capacity, and hence are not bound by the conventions of their office or by pre-agreed positions. As such, they can take time to listen, reflect and gather insights. There is no detailed agenda, no resolutions are proposed, no votes are taken and no policy statements are issued.

Markarowa, Oksana (UKR), Ambassador of Ukraine to the US

Netherlands, H.M. the King of the (NLD)

Rende, Mithat (TUR), Member of the Board, TSKB