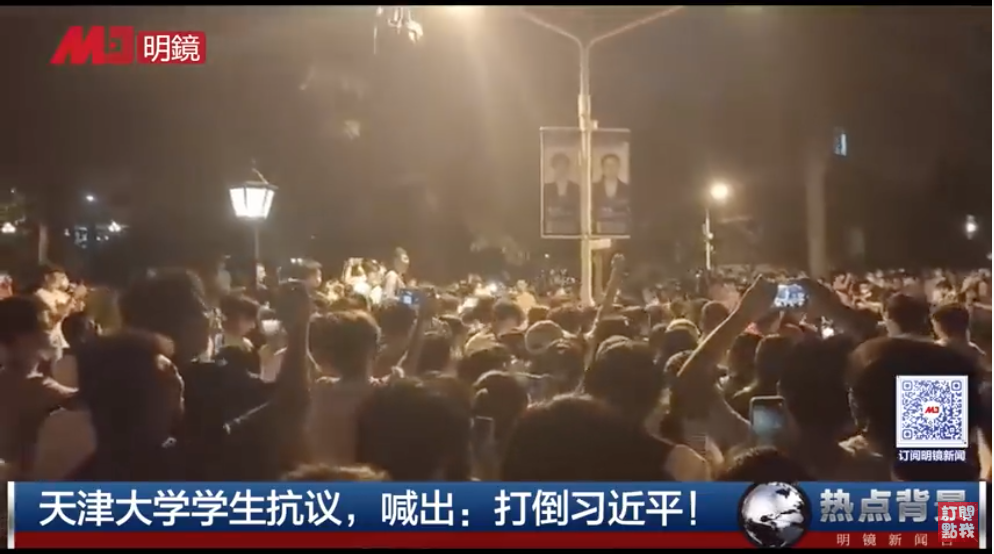 As June 4th approaches, there are waves of protests at universities across China. According to a recent video (below) now removed from Twitter, a large-scale demonstration broke out at Tianjin University on the evening of May 26 and students collectively protested against the closure of the city and school closures. Demonstrators shouted slogans: Down with Xi Jinping! Down with bureaucracy! Down with formalism!

The protest video starts at 1:30

The air in Shanghai is tense.

On that day, the CCP announced a “dynamic clearing” would be carried out in Shanghai. It was a military order, a do-or-die mission, and there was no room for bargaining.

Fudan University is now cut off from the Internet and the campus is blocked.

Prior to April 20, news circulated on some WeChat and Weibo channels that the school installed cameras everywhere to monitor students. Among them, a camera was placed at the shower room of the female student dormitory in Building 1. This breach of privacy was protested by the students with signs on the walls stating “no micro fascism”. The school tried to justify the violation by explaining that the camera had been turned towards the door, not the girls’ shower room.

As student protests began to gather steam, the internet was shut down and the campus was blocked. This lockdown was allegedly in response to the beating of one of President Xi Jinping’s mentors named Zhang Weiwei.

Zhang Weiwei, an unpopular professor who was appointed by President Xi, delivered a famous speech in which he said, “we are fortunate to live in a socialist country that respects life the most. We live in a great country that is superior in all aspects of international comparisons.”

He supports the Chinese government’s extreme lockdown measures,  the so-called, “Zero-Covid” policy and advocates that the Chinese response to the pandemic is superior to the European and American models in dealing with Covid-19.

As a result of these extremely unpopular views, Zhang was beaten by an angry young teacher on April 20. The fight caused a stir. The students supported the young teacher, while school authorities sided with Zhang Weiwei.

A large number of military police were rushed to Fudan University and the campus was placed on complete lockdown under martial law.

After Zhang Weiwei was beaten, there was a lot of applause on the internet by average Chinese citizens. Such online comments and reactions were quickly removed by authorities.

A video of the protest at Fudan University came out on April 23, 2022, which shows a large number of police officers, likely the Shandong special police dispatched by Xi Jinping.

They entered Fudan University fully armed with electric batons, shields, police cars and tear bombs. The footage showed that they went to arrest the young teacher (wearing white) who beat up Zhang Weiwei.

During the arrest, close to one thousand outraged students rose up and attacked the police force with rocks and glass bottles. The SWAT officers had to block them with shields. Although they captured the young teacher, police retreated from Fudan University with embarrassment.

Throughout the video, students were singing “The Internationale “:

“Stand up, all victims of oppression
For the tyrants fear your might
Don’t cling so hard to your possessions
For you have nothing, if you have no rights

This Fudan incident was declared by the CCP to be the largest student movement since the Tiananmen Square Massacre on June 4th, 1989.

The future of Fudan University is unclear but has important ramifications for students and universities in China and worldwide. What is clear, is that FREEDOM AND HUMAN RIGHTS are essential.

The world cannot allow the Fudan University protests to be hidden and forgotten. Please share this news far and wide.