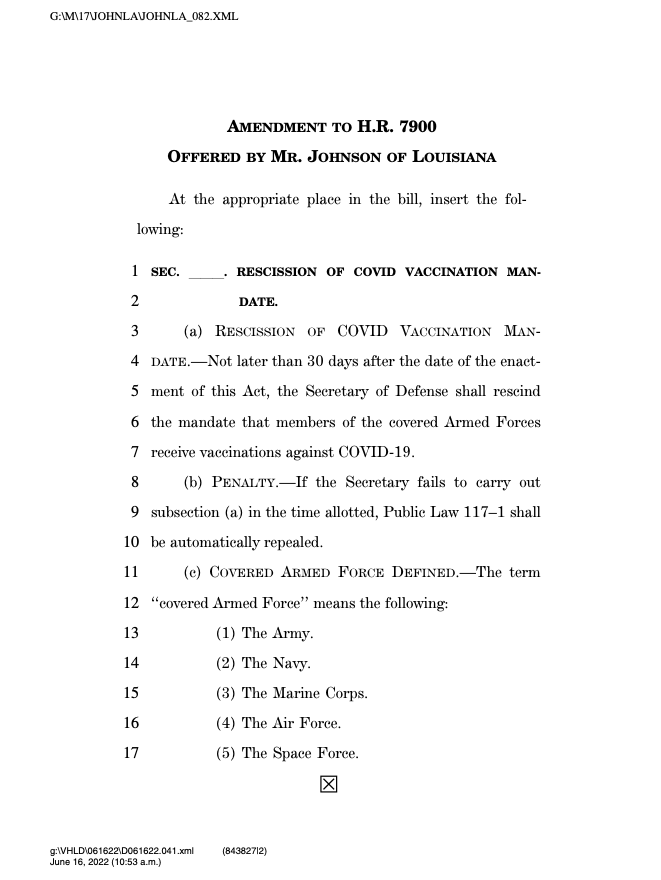 Results of the military vaccine mandate:

Only 58 religious exemptions out of 22K requests

If @SecDef does not withdraw the mandate, his waiver to serve as Defense Secretary should be rescinded. pic.twitter.com/AeJiZtEv7H

United States Representative Mike Johnson (LA-04) today introduced an amendment to the 2023 National Defense Authorization Act which would require Secretary of Defense Lloyd Austin to repeal the COVID vaccine mandate for servicemembers within 30 days. If Secretary Austin does not repeal the mandate, his waiver to serve as Secretary of Defense would be repealed.

“There’s a rather lengthy list of things that have gone wrong under Secretary Austin’s tenure at the Department of Defense, starting with the Biden Administration’s catastrophic troop withdrawal from Afghanistan,” Johnson said. “Perhaps nothing has been more damaging than the COVID vaccine requirement for servicemembers which is forcing qualified people out of our armed forces and preventing qualified people from joining our armed forces.”

Congressman Johnson introduced the amendment for a vote during the House Armed Services Committee vote on the Fiscal Year 2023 National Defense Authorization Act. The amendment was rejected by Committee Democrats.

Background on the amendment:

Congressman Johnson is the Vice Chairman of the House Republican Conference, a member of the House Judiciary and Armed Services Committees, and a former constitutional law litigator.