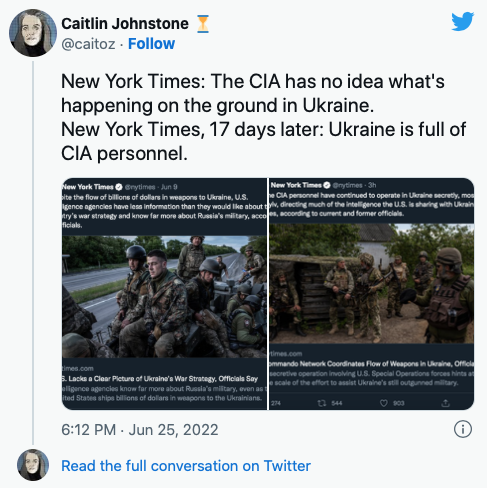 Link To Image Source_Caitlin Johnstone
A fresh New York Times report has confirmed what many already suspected – that the CIA is still very active inside Ukraine – especially with training as well coordinating weapons among its Ukrainian allies. The Times report details “a stealthy network of commandos and spies rushing to provide weapons, intelligence and training,” based on US and European intelligence officials with knowledge of the operations. The report says Ukrainian forces are reliant on this Western clandestine network “more than ever” while outgunned by the Russians.

This comes months after investigative journalist Zach Dorfman’s bombshell expose in Yahoo News which detailed how a prior 8-year long CIA covert program to train Ukrainian fighters helped provoke the Russian invasion. The only question that remained after that March report was the extent to which the CIA was still active in the ongoing fight against the invading Russians.

The new Times reporting confirms that the US program is not only active and ongoing, but appears larger in scale than previously thought given the CIA’s close cooperation with the Ukrainians is happening both inside and outside the country, across multiple locations.

“Much of this work happens outside Ukraine, at bases in Germany, France and Britain, for example. But even as the Biden administration has declared it will not deploy American troops to Ukraine, some C.I.A. personnel have continued to operate in the country secretly, mostly in the capital, Kyiv, directing much of the vast amounts of intelligence the United States is sharing with Ukrainian forces, according to current and former officials,” the report indicates.

It appears much the CIA’s work in Ukraine is centered on coordinating intelligence with local intel services and counterparts. “Few other details have emerged about what the C.I.A. personnel or the commandos are doing, but their presence in the country — on top of the diplomatic staff members who returned after Russia gave up its siege of Kyiv — hints at the scale of the secretive effort to assist Ukraine that is underway and the risks that Washington and its allies are taking,” NY Times continues.

Over the weekend, Canada also has been reported to have special operations troops inside Ukraine. This was reported months ago, but with a separate NYT report offering further confirmation. “Both CTV and Global News reported in late January that Canadian special forces had been sent to Ukraine, but National Defence did not comment on that deployment,” Ottawa Citizen writes Sunday. Back in January, a full two months before the invasion, Yahoo News disclosed the following:

The CIA is overseeing a secret intensive training program in the U.S. for elite Ukrainian special operations forces and other intelligence personnel, according to five former intelligence and national security officials familiar with the initiative. The program, which started in 2015, is based at an undisclosed facility in the Southern U.S., according to some of those officials.

The CIA-trained forces could soon play a critical role on Ukraine’s eastern border, where Russian troops have massed in what many fear is preparation for an invasion. The U.S. and Russia started security talks earlier this week in Geneva but have failed thus far to reach any concrete agreement.

While the covert program, run by paramilitaries working for the CIA’s Ground Branch — now officially known as Ground Department — was established by the Obama administration after Russia’s invasion and annexation of Crimea in 2014, and expanded under the Trump administration, the Biden administration has further augmented it, said a former senior intelligence official in touch with colleagues in government.

These details further seems to authenticate those voices which have been insisting NATO and Russia are in fact waging a proxy war inside Ukraine, a label which Biden administration officials have previously sought to deny and downplay.

Link To Article _ The CIA and “Uncle Louie”