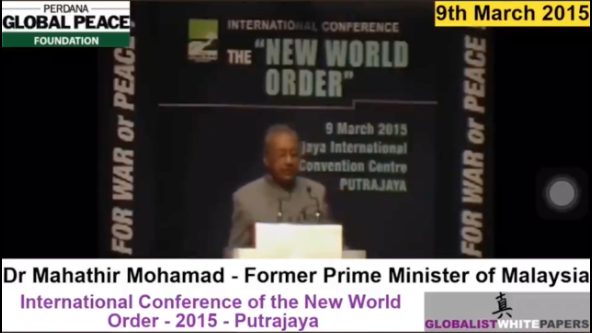 At a March 9th, 2015 International Conference titled “The New World Order – A Recipe of War or Peace!” Former Malaysian Prime Minister Mahathir Mohamad warned that the ‘Elites want to reduce the world population to 1 Billion’ and will go to any length necessary to achieve their goal.

“Basically, it is about having a world government. We should abolish all states, nations, and bodies but instead have only a one-world government. And that world government is to be by certain people, elites. People who are very rich, very intelligent, very powerful in many ways. They are the ones who will govern the world. There was not much talk about democracy or the choice of leaders, instead, there was to be a government by these elites who will impose their rules on everyone in this world. And for those who are unwilling to submit to them, there will be punishment,” Dr. Mahathir explained.