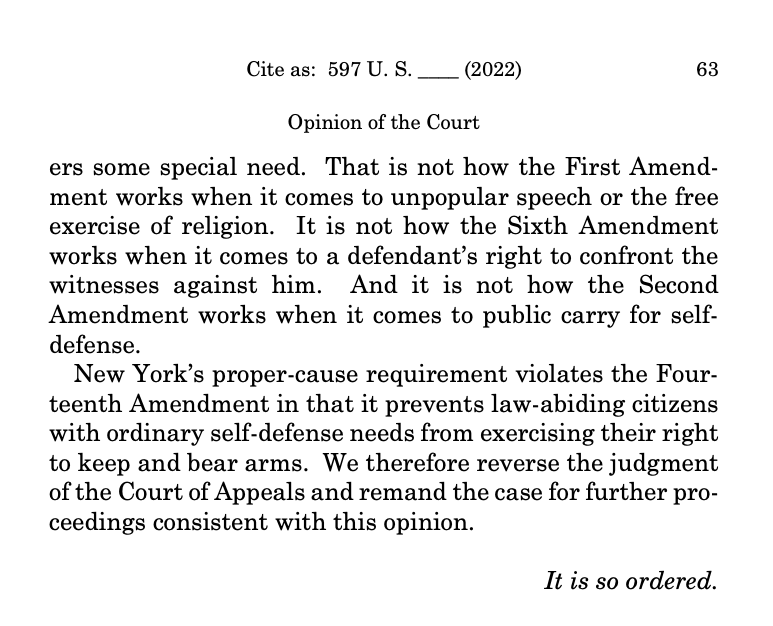 The Supreme Court on Thursday handed down its opinion in a landmark Second Amendment rights case, the biggest win for gun rights since the court’s Heller ruling holding that “New York’s proper-cause requirement violates the Fourteenth Amendment by preventing law-abiding citizens with ordinary self-defense needs from exercising their Second Amendment right to keep and bear arms in public for self-defense.”

The ruling came down 6-3, with Justice Clarence Thomas writing the majority opinion joined by Justices Roberts, Alito, Gorsuch, Kavanaugh, and Barrett — plus concurring opinions by Justice Alito and Justice Kavanaugh. Justices Breyer wrote the dissent joined by Sotomayor, and Kagan.

Thomas’s opinion explains, in part, that “confining the right to ‘bear’ arms to the home would make little sense given that self-defense is ‘the central component of the [Second Amendment] right itself.'”

In District of Columbia v. Heller, 554 U. S. 570 (2008), and McDonald v. Chicago, 561 U. S. 742 (2010), we recognized that the Second and Fourteenth Amendments protect the right of an ordinary, law-abiding citizen to possess a handgun in the home for self-defense. In this case, petitioners and respondents agree that ordinary, law-abiding citizens have a similar right to carry handguns publicly for their self-defense. We too agree, and now hold, consistent with Heller and McDonald, that the Second and Fourteenth Amendments protect an individual’s right to carry a handgun for self-defense outside the home.

Justice Thomas also explained that the Second Amendment doesn’t take a back seat to other God-given rights defined by the Bill of Rights as belonging to the people and not to be infringed upon by the government:

The constitutional right to bear arms in public for self defense is not “a second-class right, subject to an entirely different body of rules than the other Bill of Rights guarantees.” We know of no other constitutional right that an individual may exercise only after demonstrating to government officers some special need. That is not how the First Amendment works when it comes to unpopular speech or the free exercise of religion. It is not how the Sixth Amendment works when it comes to a defendant’s right to confront the witnesses against him. And it is not how the Second Amendment works when it comes to public carry for selfdefense. New York’s proper-cause requirement violates the Fourteenth Amendment in that it prevents law-abiding citizens with ordinary self-defense needs from exercising their right to keep and bear arms. We therefore reverse the judgment of the Court of Appeals and remand the case for further proceedings consistent with this opinion.

In his concurring opinion, Justice Samuel Alito noted that “Today, unfortunately, many Americans have good reason to fear that they will be victimized if they are unable to protect themselves. And today, no less than in 1791, the Second Amendment guarantees their right to do so,” he declared.