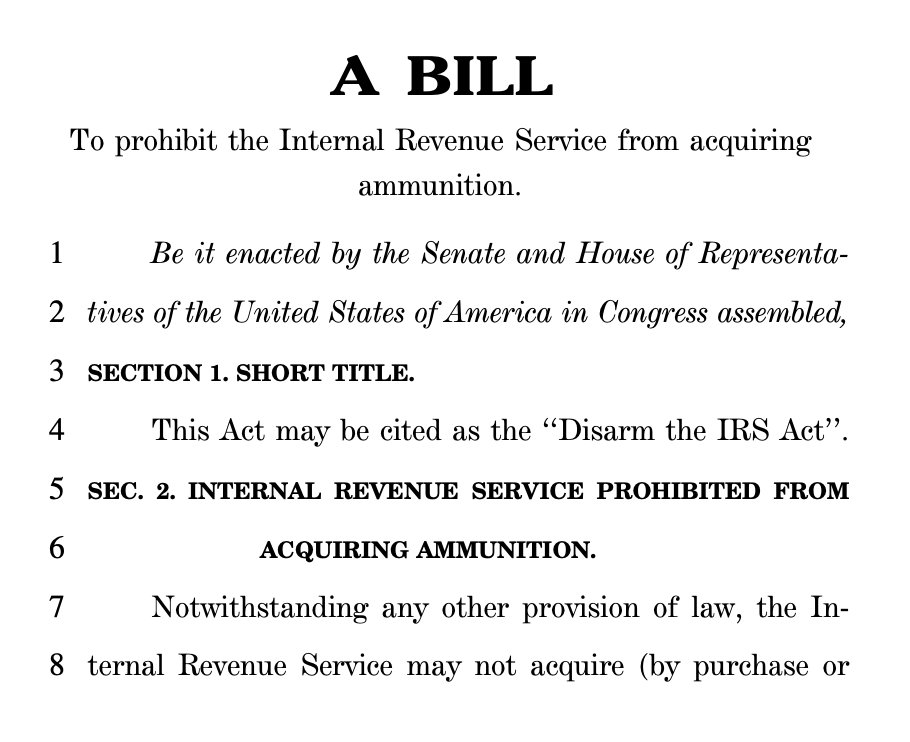 Rep. Matt Gaetz (R-Fla.) on Friday introduced a bill in the House to bar the Internal Revenue Service (IRS) from acquiring ammunition.

The bill (pdf), known as the “Disarm the IRS Act,” stipulates that the IRS is “prohibited from acquiring ammunition” and “notwithstanding any other provision of law.” Reps. Marjorie Taylor Green (R-Ga.), Paul Gosar (R-Ariz.), and Jeff Duncan (R-S.C.) are co-sponsors of the measure, according to his office.

It came after Gaetz, in interviews with Fox News and other outlets, expressed concern after he discovered that the IRS purchased more than $700,000 in ammunition in recent days. The congressman suggested that it’s part of a broader White House plan to disarm Americans.

“Here’s the Biden plan: Disarm Americans, open the border, empty the prisons–but rest assured, they’ll still collect your taxes, and they need $725,000 worth of ammunition, apparently, to get the job done,” he told Fox News last week.

The bill, he said, would put a “total moratorium on the IRS buying ammo. When we used to talk about the IRS being weaponized, we were talking about political discrimination, not actual weapons for the IRS.”

“Undeniably, part of the strategy is that with one hand, the Biden regime is doing everything they can to suppress access to ammunition for regular Americans, while with the other hand, they are scooping up all the ammo that they can possibly find,” Gaetz alleged.

According to a report released by the Government Accountability Office in 2018, the IRS has been stockpiling ammunition and weapons for years. As of 2018, the agency had 4,487 firearms and 5,062,006 rounds of ammunition in its inventory, the report said.