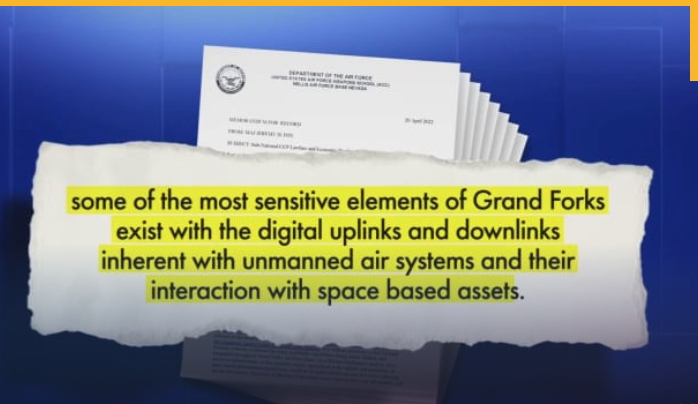 “Air Force would have little ability to detect any electronic surveillance on drone and satellite transmissions being conducted from the Chinese property. “Passive collection of those signals would be undetectable, as the requirements to do so would merely require ordinary antennas tuned to the right collecting frequencies,” he wrote. “This introduces a grave vulnerability to our Department of Defense installations and is incredibly compromising to US National Security.” LINK

At first glance, the largely barren, wind-swept tract of land just north of Grand Forks, North Dakota, seems to be an unlikely location for international espionage.

There’s not much on the more than 300-acre patch of prime Dakota farmland right now other than dirt and tall grasses, bordered by highways and light industrial facilities on the outskirts of the city.

The nearest neighbors include a crop production company, a truck and trailer service outfit, and Patio World, which sells landscaping supplies for suburban backyards.

But when the three North Dakotans who owned the parcels of land here sold them for millions of dollars this spring, the transaction raised alarm bells as far away as Washington, D.C.

That’s because the buyer of the land was a Chinese company, the Fufeng Group, based in Shandong, China, and the property is just about 20 minutes down the road from Grand Forks Air Force Base — home to some of the nation’s most sensitive military drone technology.

The base is also the home of a new space networking center, which a North Dakota senator said handles “the backbone of all U.S. military communications across the globe.”

Now some security experts warn the Chinese corn milling plant should be stopped, because it could offer Chinese intelligence unprecedented access to the facility.”