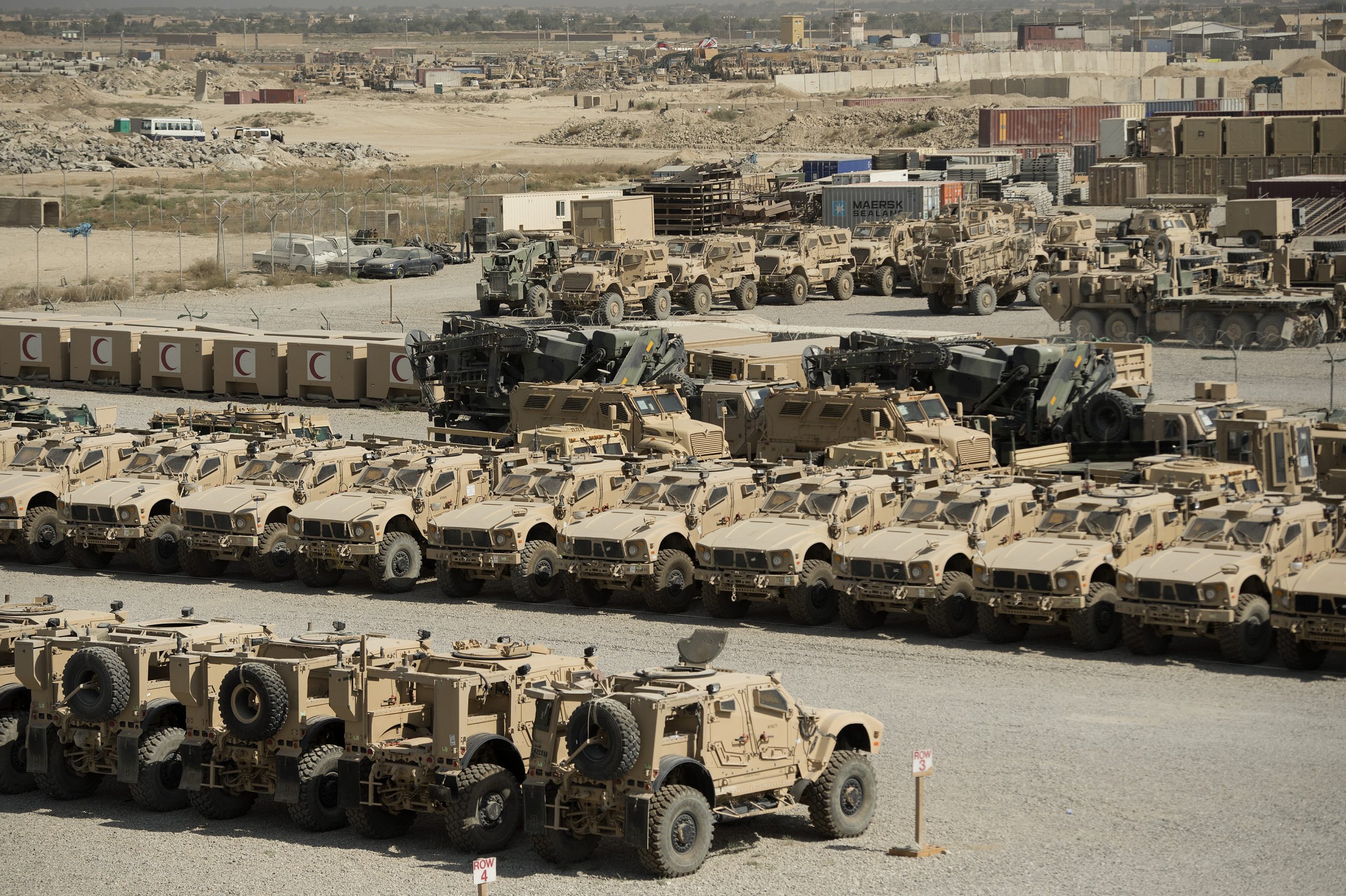 Vehicles and accessory equipment fill a retrograde yard at Camp Warrior, Bagram Airfield, Afghanistan, Oct. 2, 2013, before being shipped from the base. The airfield served as a major hub for retrograde operations out of Afghanistan. U.S. Airmen with the 455th Expeditionary Aerial Port Squadron special handling section processed 4.2 million pounds of retrograde equipment during September 2013. (U.S. Air Force photo by Master Sgt. Ben Bloker/Released)

In a colossal failure, the Biden Administration left a gift of over $7 BILLION in military equipment in the botched Afghanistan withdrawal, making the Taliban one of the best equipped militaries in the world. -JD

Did you know? The US has financed the Taliban for decades:

LINK Congressman Jim McDermott on CNN Crossfire Sept. 10. 2002  / Admits the US placed the Taliban in Afghanistan in 1996

Inspector General: The U.S. Government Left More Than $7 Billion in Military Equipment to the Taliban

Defense Department Inspector General has released its long-awaited report on what the Biden Administration left behind in Afghanistan. It is an unbelievable list of equipment left to one of the most violent groups in the world with a history of supporting terrorist organizations. I opposed the long war in Afghanistan, so I was not among those critical of Trump or Biden in pushing to leave the conflict. However, no one has ever explained why the Biden Administration left this equipment in Afghanistan as opposed to removing it or destroying it.

While the collapse of the Afghan government was rapid in the final days, the government had many months to prepare for the scheduled withdrawal. Yet, it took no steps to remove or destroy this equipment. Instead, it elected to leave this arsenal intact to the Taliban.

The ground vehicle inventory alone was worth about $4.12 billion. In addition, the U.S. military lost $923.3 million worth of military aircraft and $294.6 million in aircraft munitions.

The Taliban was instantly made one of the best equipped militaries in the world due to this windfall gift by the Biden Administration.

While the report says that “some” of the aircraft were “demilitarized and rendered inoperable during the evacuation,” most of this equipment was left read to use, including 316,260 small arms, including sniper rifles, machine guns and grenade launchers that were worth $511.8 million.

I do not understand how this clear and unimaginable blunder has gone unaddressed. No one was fired. There is not even any evidence of discipline of any kind. The Biden Administration decided to give the Taliban billions in weapons rather than destroy them. Yet, there seems little more than a shrug and a yawn from Congress and the press.

Link To_Warlord Inc. Extortion and Corruption Along the U.S. Supply Chain in Afghanistan

Drop All Charges Against and Attempts to Extradite Julian Assange

Should dual citizens in Congress and other public offices be required to disclose their citizenship status?