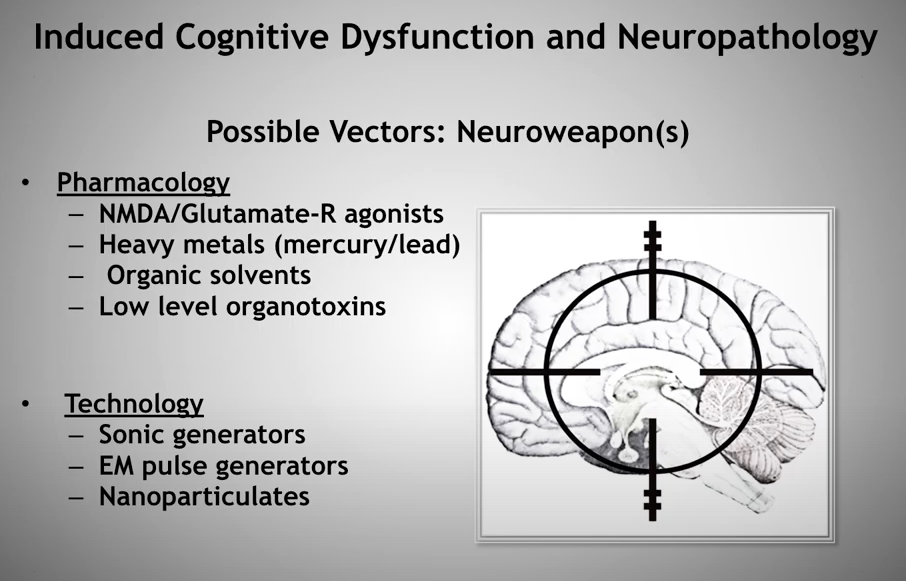 The Weaponization Of Neuroscience

In this 2011 presentation, Dr. James Giordano, Professor of Neurology and Biochemistry at Georgetown University Medical Center, lectures on weapons of mass disruption, also known as neuroweapons. He describes NEUROWEAPONOLOGY, the ability to create a ripple effect of disrupting the process of cognition, emotion, and behavior, not only on individual scales but also on socioeconomic scales, geopolitical scales, and military scales. Dr. Giordano mentions cell phones, microwaves or electromagnetic pulse, and aerosolized particulate matter, at the nanoscale, in the context of neuroweapons. Graphene oxide is another element that might be included in this platform.

Many recognize that the deliberate destabilization of the USA and all nations of the world during the covid campaign was a skillful, calculated psychological warfare operation that not only induced mass fear of illness (hypochondria) but also included layered operations to intentionally disrupt the social fabric of society, [DIVIDE AND CONQUER] to orchestrate and incite race wars, gender wars, religious wars, generational wars and other engineered divisions.  Social media, cell phones, and wireless infrastructures (4G-5G-6G-AI+) including satellites, are tools ( neuroweapons ) to influence and change thoughts, attitudes and behaviors. Not only are the devices designed to be addictive, they are also designed to be interactive inside the Internet of Bodies. Great spiritual strength and self awareness, as well as bioethics and safety regulations are needed to escape the wireless technocratic prison and liberate ourselves, future generations, and all life on Earth from the permanent slavery of MindWar. -JD

Link To_Neurotechnologies as weapons in national intelligence and defense – An overview