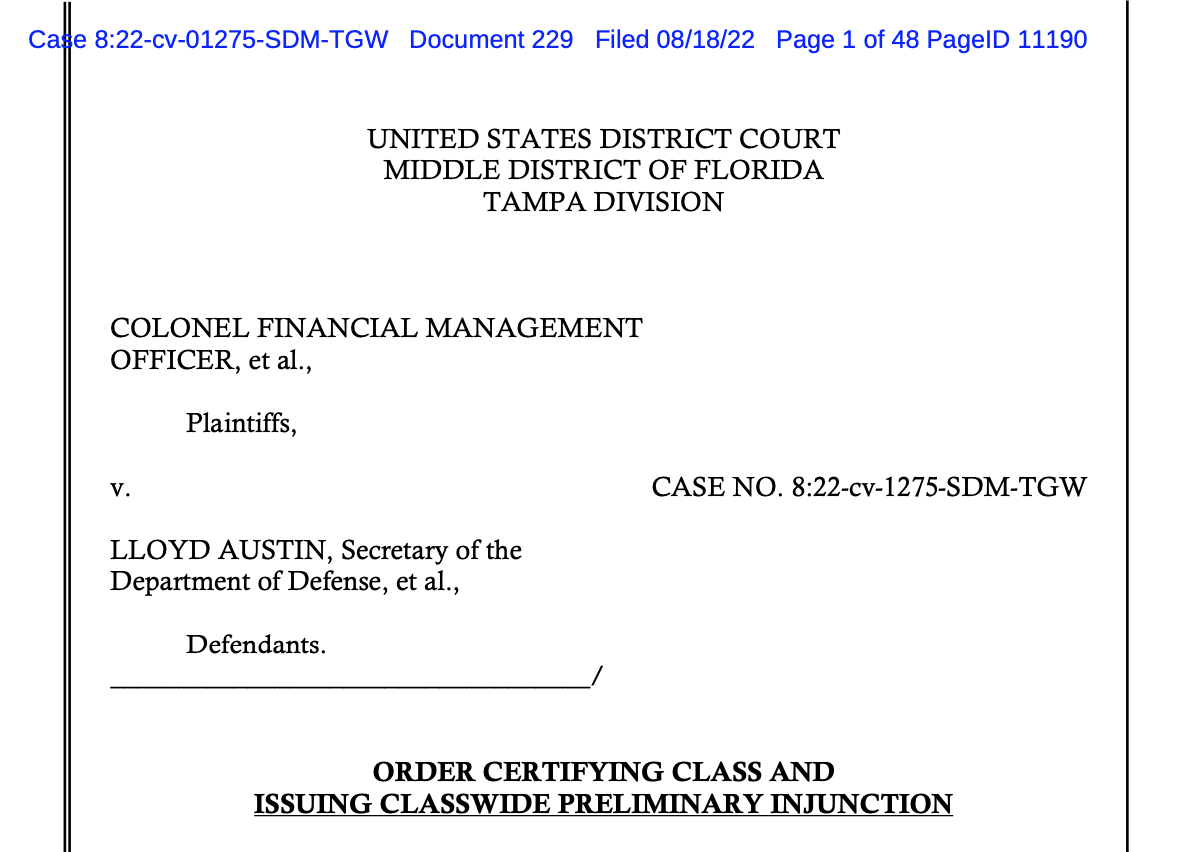 The U.S. District Court of Florida has granted a classwide preliminary injunction for U.S. Marines from the unlawful covid-19 mRNA shot mandate.  The Biden Administration and the DOD violated the rights of U.S. Maines under the Religious Freedom Restoration Act [RFRA].

RFRA directs the district court to award a successful plaintiff an “appropriate remedy” to protect Free Exercise against undue restriction by any component of the federal government, which includes the legislative, the judicial, and the executive branch, including the armed forces and, in this instance, including the Marine Corps.” – p.45

The U.S. District Court of Florida has provided class action relief and granted a classwide preliminary injunction from the unlawful federal COVID shot mandate on behalf of those who are in active or reserve service in the United States Marine Corps. Liberty Counsel sued Secretary of Defense Lloyd Austin and pursued this class action relief on behalf of all U.S. Marines who were denied religious accommodations from the COVID shots which are associated with aborted fetal cells.

U.S District Court Judge Steven Merryday has now issued the following injunction against the Department of Defense and the U.S. Marine Corps:

In his order, Judge Merryday notes that 3,733 Marines have requested religious accommodations from receiving the COVID-19 shot ordered by the Secretary of Defense Lloyd Austin in August 2021. Yet the Marine Corps has granted only 11 accommodations which includes only those who are due for retirement and prompt separation.

Then the court poses the question: “Is it more likely than not — in nearly all 3,733 cases —that no reasonable accommodation was available?”

The court continues, “Because the record reveals the substantial likelihood of a systemic failure by the Marine Corps to discharge the obligations established by RFRA, a class wide preliminary injunction is warranted to preserve the status quo, to permit the full development of the record without prejudice to the plaintiffs, and to permit both a trial and a detailed, fact-based resolution of the controlling issues of fact and law.”

“When Congress acts to preserve liberty, especially a liberty historically and constitutionally fundamental to the United States, the courts — the intended preserve of liberty — must not evade or equivocate, must not, so to speak, sacrifice the fundamental right of thousands of privates to Free Exercise in order to gratify the preference of a few generals.”

Judge Merryday continues with a strong statement regarding the rights of these service members under the Religious Freedom Restoration Act by stating, “Obviously, RFRA includes everyone from the President to a park ranger, from the Chief Justice of the United States to a probation officer, from the Speaker of the House to a member’s district office staffer, from the Chairman of the Joint Chiefs of Staff to a military recruiter — even if they don’t like it and even if they don’t agree with it. The Free Exercise Clause and RFRA are the law of the land.”

The court continues, “The Marine Corps persistently and resolutely clings to the belief that their accustomed and unfettered command discretion need not yield — on the narrow and specific question of Free Exercise — to the statutory command of RFRA or to an order under RFRA from a district court (actually, at this moment, orders from several district courts), the forum selected by Congress and enacted in RFRA to resolve a dispute under RFRA (in other words, Congress and the President, not the district court, chose the district court as the proper forum for service members to assert the RFRA claim asserted in this action). The Marine Corps repeatedly asserts, ‘The Supreme Court has made clear: ‘Judges are not given the task of running the Army,’ a quote from Orloff v. Willoughby, 345 U.S. 83, 93 (1953), a dispute resolved forty years before the enactment of RFRA. Although certainly not ‘given the task of running the Army,’ the courts in the narrow instance of RFRA are assigned to, and entrusted to, ensure that those who run the Marine Corps (and the military in general and every other component of the federal government) conform their actions to the governing law, to RFRA, to which the admirals and the generals and the commandants are unquestionably subordinate — just like the President, the Speaker of the House, the Chief Justice, and every other person in the federal government. To repeat: Yes, Congress and the President, not the courts, govern the military. But Congress and the President in governing the military and by enacting RFRA have established — for the narrow category of Free Exercise — an action and a remedy in the district court, have specified and placed the burden of proof on the military, and have allowed for an ‘appropriate remedy’ to ensure a service member’s Free Exercise. That conclusion is not fairly contestable, and the military must acquiesce to the command of Congress and the President in that respect. A service member can sue in a district court to enjoin a violation of RFRA. And the pursuit of relief from a systemic deprivation of Free Exercise, preserved and protected by RFRA, presents a claim uniquely susceptible to resolution in the district court. This order and this action will proceed accordingly.”

Judge Merryday also addresses Liberty Counsel’s First Lieutenant plaintiff and others who were given only two days’ notice for discharge from the Marine Corps and ordered to leave their homes.

“And the resort to two-day warnings of discharge (and, in the instance of First Lieutenant and undoubtedly others, suddenly charging daily rent of more than $100 to remain in military housing while packing one’s family and searching for civilian housing) suggests retribution and retaliation, the existence of which detracts from the Marine Corps’s claim elsewhere in this action to good faith treatment of a religious objector.”

“The Marine Corps’s blanket rejection of RFRA’s burden confuses the sincerity inquiry with the substantial burden inquiry, which further reveals the systemic failure under which the Marine Corps’s resolution of religious accommodations labors. Of course, the injection into the body of a substance against which the recipient harbors a sincere religious objection is morally repugnant (to the class) and perforce burdens Free Exercise. And the burden is substantial not because the vaccine and the aborted tissue satisfy some arbitrary degree of connectedness but because the order to accept injection of the vaccine forces the religiously objecting Marine to choose between betraying a sincere religious conviction and suffering court martial or separation from the military and, likely, visiting adverse consequences on the Marine’s family (such as the abrupt eviction from military housing and disenrollment from military schools).”

“Although Marines of different faiths, different education, and different acumen might understand or explain this objection differently and with more or less clarity, many Marines, including Christians and Muslims, object that the COVID-19 vaccine was developed from cell lines derived from electively aborted fetuses and that introducing an mRNA-active substance into their body either desecrates their body, a temple of the Holy Spirt, or is haram, forbidden. In any case, neither the military nor the judiciary can judge the validity of a religious objection (unless the objection is irrational, delusional, or the like) — but can judge only the sincerity of the belief, which is demonstrated firmly in the administrative record by the chaplain’s assessment of sincerity.”

The court continues with statements that the DOD has failed to uphold the religious freedom of Marines who choose to decline the COVID shots for religious reasons—a decision which does not affect their ability to serve in their military positions.