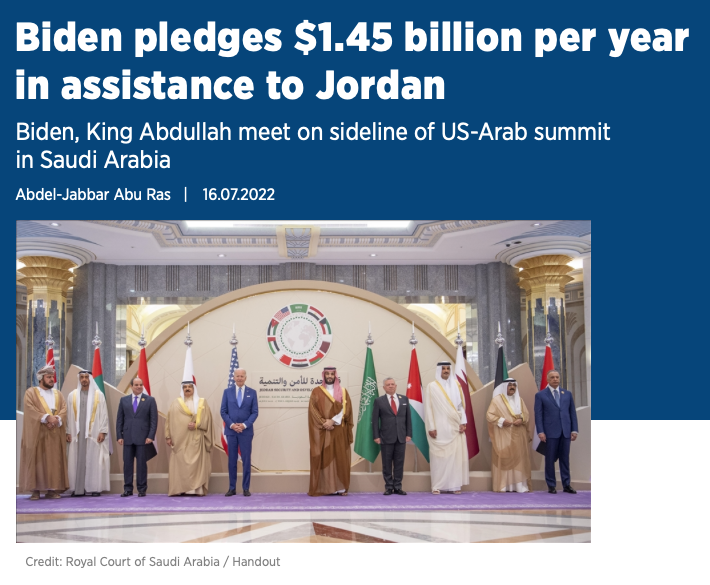 Is the U.S. federal government addicted to reckless and irresponsible spending?

Even though the State Department is aware that Jordan’s record includes significant human rights abuses such as torture, arbitrary arrest and detention, violence against women, and crimes targeting those who identify as LGBT, Joe Biden signed a Memorandum of Understanding (MOU) for $10.15 Billion to Amman over the next seven years.

Funding for Jordan has increased over the past several administrations, with handouts from Obama, Trump, and Biden.

Jordan is the third largest recipient of free money given away by DC politicians.  The 1st and 2nd highest recipients of U.S. taxpayer money also have tarnished human rights records: Ukraine and Israel. Top recipient Ukraine has banned most political opposition parties and nationalized it’s media while Israel is recognized by many western NGO’s as an apartheid state.

Ayman Safadi, Jordan’s foreign minister, said that the U.S. aid package would help the country deal with their refugee crisis, specifically to build schools, universities and create new jobs. He also said that the money would be used to boost border security.

This fact underscores the hypocrisy and corruption of the Biden administration, that has prioritized the best interests and security of other nations before the USA.  -JD

“Some of the aid will help Amman manage the 1.3 million Syrian refugees.”  LINK