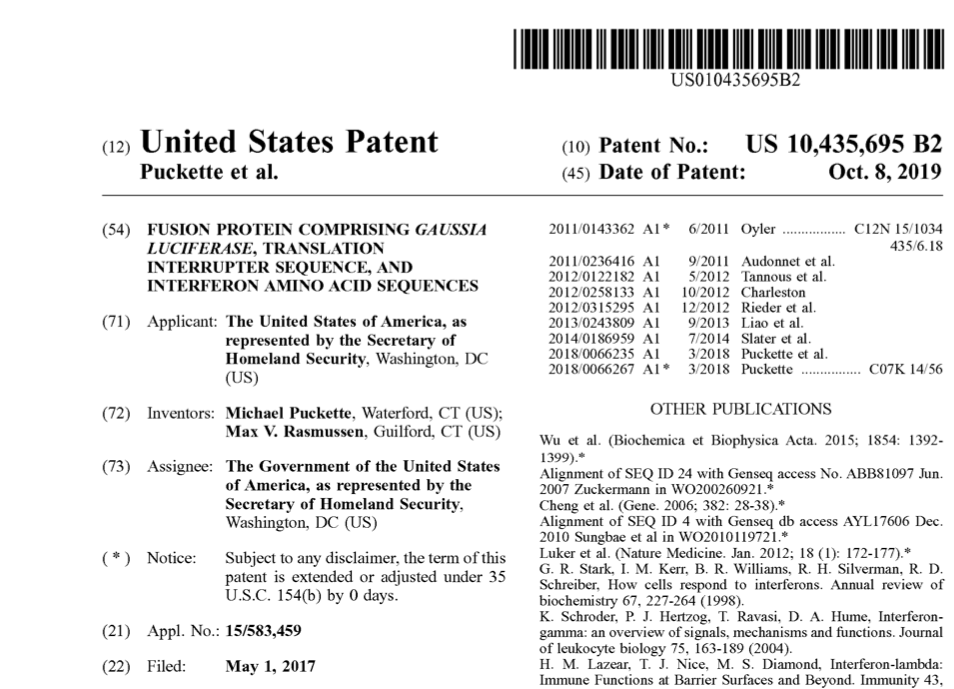 Why Does The U.S. Department of Homeland Security Own The Luciferase Patent?

In 2019 the United States Department of Homeland Security (DHS) was granted a patent for fusion proteins that contain luciferase. Wikipedia defines Luciferase as “a generic term for the class of oxidative enzymes that produce bioluminescence”, allowing for  tracking of cells. The original patent was filed in 2017. This enzyme has apparently been harnessed for use in CV-19 tests and vaxx research.

WHY would the United States government and DHS file a patent for a bio-surveillance protein 2 years before the CV-19 event?  -JD

Why is Luciferase in Patent US10435695B2? And why is that patent owned by the Department of Homeland Security?

What does this mean?

It means that COVID is a U.S. government operation. That’s why DHS is filing a bio-surveillance protein patent two years before the official outbreak of COVID. That’s why Obama’s deputy director of the CIA showed up at a coronavirus simulation exercise called Event 201 (sponsored by the WHO and the Gates Foundation!) in November 2019. That’s why DARPA (the R&D wing of the CIA) is “heavily invested” in vaccine development as if it’s some kind of healthcare provider.

It means that the “COVID plandemic” is an attempt to create a total biometric surveillance state. Don’t take my word for it: just listen to the World Economic Forum’s chief intellectual Yuval Harari explain it to you. “Maybe in a couple of decades, when people look back, the thing they will remember from the COVID crisis, is: this is the moment when everything went digital. This was the moment when everything became monitored — that we agreed to be surveilled all the time. Not just in authoritarian regimes but even in democracies. This was the moment when surveillance went under the skin.”

The COVID vaccines are actually an opportunity for governments and global corporations to create a total surveillance system around the world that will ultimately control every human being.

This sounds like science fiction. It is not. There are secret ingredients in the COVID vaccines like graphene oxide (that the corporate media tells you is a conspiracy theoryof course!) that can transmit data outside the body — like your heart rate. That’s why they’re full of rare metals and odd metallic structures that are toxic to human beings.